George Grief, the sonof Louis and Ida Greif Kriegsman - also known as “Double G” - partnered with Sid Garris of Greif-Garris Management to discover, nurture, break, and guide the careers of some of the greatest performers of the 20th century.

George began his love affair with music as a returning WWII B-17 Radio Operator/Gunner Sergeant in the 8th Air Force’s “Hell’s Angels” bombardier division. Fired as bar manager from his father’s elegant restaurant, The Studio Restaurant across from Carnegie Hall, because he had ‘turned the bar into a damn Honky-Tonk’ with his two piano player friends - Burt Bacharach and Erroll Garner.

In his early 20’s, being the top Lever Brothers salesman was not a fit. George drove cross-country to Hollywood with hipster comedian Lord Buckley to start life’s journey as a personal manager. – No idea what a manager did, it was better than selling soap. While in Los Angeles Buckley and George mentored burgeoning stand-up comic, Lenny Bruce. 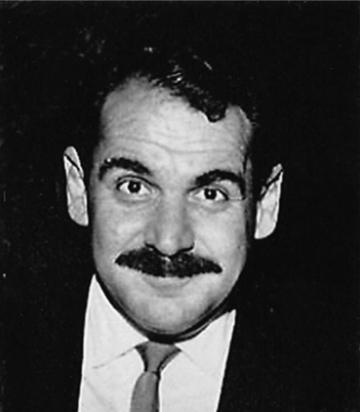 After the War, the country’s taste in Movies, Music, Broadway, Records and Comedy were all in flux. As the entertainment changed so did the entertainment business. Personal managers were considered outsiders for the Movie and Music business which traditionally only recognized agents and publicists. But that did not deter George from being a fierce advocate for his clients.

The 50’s were exciting... Beatniks and Cool Jazz flooded the nightclubs… Neo realism transformed motion pictures... Television was in its infancy... and Rock ‘n Roll was about to be born!

Opportunities for talent were limitless, as was the need for proper artist representation. There were no rules, no norms, no guidelines.  After surviving aV1 blitz attack in London, it was the perfect life fit for George!

When it came to talent, George was colorblind. When it came to “no talent”, he was deaf. Starting out he managed comics, singers, actors, musicians, composers, anyone George thought had “IT” !!

As the 50’s ended, once again America’s taste in entertainment changed.

Stuart Whitman “Cimarron Strip / The Comancheros” was nominated for an Academy Award for his dark performance in“The Mark”...  GG , always the showman, used the beginnings ofPapparazzito promote Whitman’s star popularity by hiring 20 Palais Casino Show Girls during the Cannes Film Festival to traipse around following him all over the Croisette.

Always on the lookout for new grooves and trends, George sparked when he met Randy Sparks and the New Christy Minstrels “Green, Green” “Today”.  George and Sid bought the Christy Minstrels touring the group for over 40 years including front line deployment in Vietnam Nam during the war. A stalwart advocate of the military, he contacted Agent Orange during those USO Tours.... George later wrangled the highly coveted spot on the 37th Academy Awards to have the Christy Minstrels perform the Oscar winning song “Chim Chim Cheree”.

While managing English singer Georgie Fame “Yeh Yeh”  “The Ballad of Bonnie and Clyde” George was approached by Brian Epstein to bring a new band the Beatles to the US in exchange for bringing The New Christy Minstrels to England… GG brought the Beatles to America and the rest is history.

George discovered a blind Puerto Rican singer/guitar player, Jose Feliciano (“Light My Fire”). He premiered Jose with his own primetime network special with guests Burt Bacharach, Dionne Warwick, Glen Campbell and Andy Williams. With George’s encouragement, Jose ignited a controversy over his performance of his rendition of The Star Spangled Banner at the 1968 World Series. It was the first time a performer on National Television personalized and stylized the National Anthem... Jimi Hendrix followed suit the following year at Woodstock.

Gospel music was never considered radio friendly until George heard the Edwin Hawkins Singers’ “Oh Happy Day”. He took Edwin from a church choir and started what’s become Urban Contemporary Gospel. This record made the “Songs of the Century list”... Following that record, George teamed Edwin with Melanie (Safka), for her hit “Lay Down (Candles in the Rain)”.

That sound led George to represent Mandrill. Parliament/Funkadelic opened for them, which introduced GG to his association with George Clinton.

Hugh Masekela, a South African trumpet player “Grazing in the Grass” at the height of apartheid found success in America and George was there to help him.

Jimmy with the Rolling Stones created one of the greatest collaborations in rock history. Jimmy produced the five Rolling Stones albums rock critics declare as the most iconic work of their careers. -- “Beggars Banquet”, “Let It Bleed”, “Sticky Fingers”, “Exile On Main Street”, and “Goats Head Soup”.

During the mayhem and frenzied time of drugs and rock George turned Jim Price, the Stones’ trumpet player into a producer. Joe Cocker’s classic, “You Are So Beautiful” was the result.

Jimmy and George found a young band named Sky whose 16-year-old lead singer; Doug Feiger went on to form The Knack, “My Sharona”.

At the Midem Music Festival, George heard a song he couldn’t get out of his head. At the controversial length of seven minutes and eleven seconds, “I’m Going To Love You Just A Little More Baby”, by Barry White was too long for radio play. Complicated because of Barry’s size, nobody wanted to release the record. Undeterred, George’s fervent belief in talent won out… Barry became one of the biggest 70’s crossover acts in the world!

Off this success, Barry formed the female group; Love Unlimited  “Walking in the Rain with the One I Love” and then The Love Unlimited Orchestra with the international smash hit “Love’s Theme”.

Moving deeper into R&B, George signed the great Lamont Dozier of Holland-Dozier-Holland, one of the originators of the Motown Sound and arguably one of the most successful songwriters of all time. Lamont produced many artists among them  Aretha Franklin, Ben E. King.  George encouraged the transition of Lamont from songwriter to artist. “Going Back To My Roots”.

True to his belief that music has no color, representing the legendary arranger and composer Gene Page, Gene’s talent had him collaborate with artists across the musical landscape: The Righteous Brothers, Barbara Streisand, Elton John, Lionel Richie, Jackson 5, Marvin Gaye, Whitney Houston. He also took Gene from behind the scenes and branched him into motion picture composing and as a recording artist himself : Hot City , Fun with Dick and Jane .

Always going back to his love of jazz, George met Joe Sample, Nesbert “Stix” Hooper, Wilton Felder of the Jazz Crusaders. Under his management, he took them out of clubs with their global hit “Street Life” elevating the Crusaders to pop superstar status with unknown singer Randy Crawford.

Albert Grossman, (Bob Dylan), Bernie Brillstein, (John Belushi), Jerry Weintraub (John Denver), Pete Cameron (The Who,) Freddy Deman (The Jacksons) were from a generation where managers didn’t consider one another as competition but as friends and colleagues. George had life long relationships with all of them.

His greatest friend and confidant however, was Shep Gordon (Alice Cooper/Luther Vandross). Together, Shep and George were inseparable globetrotters. Living their daily pearls of wisdom for life’s success; “Love what you do”, “only work with those you respect”, “relish challenge”, “always enjoy yourself”, and most importantly, “life’s too short to drink bad wine!”.... These two friends became brothers in music, food and life!

Growing up as a son of a restaurant owner, George always loved food.  He befriended and promoted a young chef, Roger Verge, in the early 60’s. During the MIDEM Music festivals he lived in Verge’s restaurant, The Moulin de Mougins in the South of France. Verge creator of “nouvelle cuisine” went on to become what one food critic wrote: “What The Beatles are to music, Verge is to food.”.... Shep went on to manage not only Verge, but some of George and Verge’s close friends: Emeril Lagasse, Daniel Boulud, Dean Fearing.

No matter what your talent, if you had it, George would promote it!  Few managers had such diverse taste in artist and music coupled with the ability to bring out and encourage their gifts to the world!

George loved to make deals. He maintained that if he was in the room when a deal happened, he was part of it!   .... So, GG made sure he was everywhere!

Unlike today, the early years of Show Biz was more of a club. George was an integral part and pioneer of the personal management business. He was a founder and serve as Vice President of the National Conference of Personal Managers.

George’s incredible journey was shared by his beautiful Marzia, wife of 54 years. His proudest accomplishment was his pride and love of their children Leslie, Laura, Diane and his grandchildren Julian and Natalie.

George’s son Leslie worked for his father starting at 14 as a road manager... He has gone on to become an award-winning Hollywood Producer, The Hatfields and the McCoys, Walker Texas Ranger, Gene Simmons Family Jewels.

“Some times are good,
some times are bad,
that’s all a part of life,
and standing in between them all,
You’ll meet a Mr. Greif”

We’re certain GG is up in the palace drinking wine, telling jokes, waiting for us to join the party!

Biography courtesy of the Grief Family.