Richard O. Linke, the talent manager who helped transform Andy Griffith from a high school music teacher into an exemplar of folksy American small-town values on one of the most successful television shows of the convulsive 1960s, died on June 15, 2016, at his home on the island of Hawaii. He was 98.

Mr. Linke all but discovered Mr. Griffith. He gave him entree to Broadway and Hollywood and collaborated with the producer Sheldon Leonard to create “The Andy Griffith Show,” which stamped Mr. Griffith indelibly as Andy Taylor, the judicious, widowed sheriff who dispensed commonsensical wisdom in the fictional town of Mayberry, N.C. 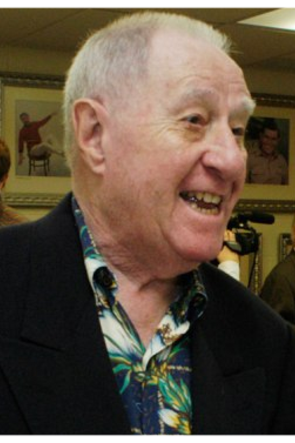 ​Mr. Linke helped make Mr. Griffith’s “’preciate it” a household phrase. He later did the same with the elongated “Goll-ly!” of another client, Jim Nabors, a lounge singer with a booming baritone who was introduced to a national audience on Mr. Griffith’s show in the role of the bumpkin Gomer Pyle.

“The Andy Griffith Show” and later “Matlock,” on which Mr. Griffith starred as a homespun but deceptively savvy defense lawyer, were network television staples for 17 years.

Long before he became a television personality, Mr. Griffith, transplanted from North Carolina to New York, had breakout roles on Broadway, in “No Time for Sergeants” in 1955, and in film, in “A Face in the Crowd,” in 1957. In that movie, written by Budd Schulberg and directed by Elia Kazan, he played Lonesome Rhodes, a hillbilly singer who metamorphoses into a megalomaniacal television personality.

Mr. Linke and Mr. Griffith began as an unlikely pair: one a growling New Jersey-born Times Square press agent with a bevy of celebrity clients, the other a small-town Southerner skeptical of Northerners. (“His teeth are too close together” was how Mr. Griffith first described Mr. Linke.)

But they were inseparable for nearly four decades, and Mr. Griffith credited Mr. Linke with launching and sustaining a show business career that otherwise might never have gotten gone beyond regional radio.

“He led me to agents, he personally took me to auditions,” Mr. Griffith told The New York Times Magazine in 1970. “If there is ever a question about something, I will do what he wants me to do; had it not been for him, I would have gone down the toilet.”

​Mr. Linke was handling publicity at Capitol Records in 1953 when he became captivated by “What It Was, Was Football,” a recorded comedy routine on which Mr. Griffith narrated a football game from the perspective of a flummoxed first-time spectator. Mr. Linke heard it late one night when, through a crystal-clear sky, his radio picked up the signal of a distant station in the South.

Mr. Linke and Hal Cook of Capitol, who had received a copy of the record separately, flew to North Carolina. They bought the rights to the record for the label for $10,000 and negotiated a contract with Mr. Griffith that called for him to receive $300 a week.

Mr. Linke signed on as Mr. Griffith’s personal manager while still working for Capitol and eventually became his business partner.

He introduced Mr. Griffith to Abe Lastfogel at the William Morris Agency, who booked him on Ed Sullivan’s television variety show, “Toast of the Town,” following a trained camel act — hardly the ideal lead-in.

Mr. Griffith survived his debut, and his career soared, especially when Mr. Leonard cast him as Sheriff Taylor and named the show after him. (Mr. Linke was associate producer at the time.) “The Andy Griffith Show” also featured the comic actor Don Knotts as Mr. Griffith’s neurotic deputy, Barney Fife; Ron Howard as his son, Opie; Frances Bavier as his maiden Aunt Bee; and Mr. Nabors as Gomer, the goofball gas station attendant.​

​In promoting Mr. Nabors, Mr. Linke followed a formula that he would successfully pursue with a number of clients: taking a relatively unkown artist and introducing himas a minor character on a successful series.

“The Andy Griffith Show”ran from 1960 to 1968 on CBS. It lives on in reruns and was followed by “Mayberry R.F.D.,” starring Ken Berry, which retained some of the show’s cast and ran for three seasons, and a spinoff, “Gomer Pyle, U.S.M.C.,” starring Mr. Nabors.

Mr. Linke once told an advertising salesman from Lever Brothers that his clients were like any other merchandise.

​“Listen, my business is just like yours,” he recalled explaining in an interview with The New York Times. “A client is like a product: You wrap your package up, merchandise it, and hope it moves off the shelves. Fast.”

How fast? “A shortcut to success, that’s what I can give an artist,” he said. “I can save him five, seven years. The big guys at CBS or the William Morris Agency are not gonna hotfoot it out to the Horn in Santa Monica where some unknown guy talks like a hillbilly and sings ‘Pagliacci.’ That’s where I come in. I open all the doors, and that’s what I did with Jim Nabors.”

After a while, Hollywood’s heavy hitters were holding doors for him. “I like to be important,” he acknowledged. “I don’t want people, when they hear my name, to say, ‘Who is Dick Linke?’”

Richard Oscar Linke was born in Summit, N.J., on Oct. 23, 1917, to Paul A. Linke, a German immigrant who became a salesman, and the former Rose Oppenauer, who came from Austria. In addition to his daughter Nanci, he is survived by his wife, the former Bettina Brenna; two other daughters, Katharine Linke and Bettina Marie Linke McCullough; two sons, Paul and Richard Jr.; and 10 grandchildren.

After graduating from Ohio University in Athens with a bachelor of science degree in journalism, Mr. Linke moved to New York to work as a reporter for The Associated Press in 1941 and then went into public relations. In 1957, after working for Capitol and Columbia Records, he formed Richard O. Linke & Associates, where his clients included Mr. Berry, Frankie Avalon, Jerry Van Dyke and Bobby Vinton.

His stated formula for success rang with homespun simplicity: “The harder I work, the luckier I get.” The hard work typically meant fielding calls from his Cadillac limousine and from 12 phones at his Santa Monica, Calif., home. He preferred not to talk about his failures. But in 1970 he recalled one with affection. The client, his second, was a crooner named Tommy Leonetti.

“I knocked myself out, we finally got up to $1,500 a week, but finally I had to say, ‘Tommy, maybe it’s my fault, why don’t you go with somebody who has more time?’” Mr. Linke recalled. He recommended another manager.

“I dropped out and didn’t take a dime, and sure enough, he made it,” Mr. Linke said, with a hint of both pride and humility. Then he paused. “He hasn’t made it here, of course, but Tommy is very big in Australia.”